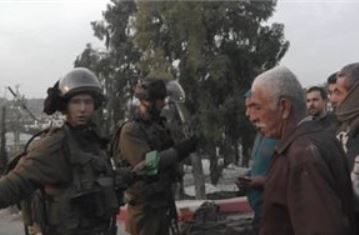 [Friday at dawn, November 1, 2013] Local sources in Beit Ummar town, near the southern West Bank city of Hebron, have reported that dozens of soldiers invaded the town and kidnapped two Palestinians. Clashes took place with the invading soldiers while dozens of residents suffered the effects of tear gas inhalation.Mohammad Ayyad Awad, spokesperson of the Popular Committee against the Wall and Settlements in the town, said that the soldiers broke into and searched dozens of homes and kidnapped the two residents.

Awad said that the soldiers broke into the home of Ibrahim Bahar by smashing its main door, and kidnapped his son Shadi, 22, after violently attacking and beating him.

He added that the soldiers also invaded the home of Thiab Awad, and kidnapped his son Montaser, 24, a former political prisoner.

Furthermore, soldiers installed a military roadblock at the entrance of the town, prevented the residents and their vehicles from entering or leaving it. Soldiers also detained and interrogated dozens of residents while searching their cars.

Several soldiers also broke into a bakery in the town, detained all workers, and searched the property.

Soldiers were also deployed near the entrance of the local mosque in the village, stopped the residents heading for dawn prayers, and inspected their ID cars before preventing several young men from entering the mosque.

It is worth mentioning that the army invaded Beta village, south of the northern West Bank city of Nablus, and kidnapped seven teenagers.

Local sources have reported that the soldiers broke into and searched dozens of homes, especially in the eastern area of the village.

The families of the kidnapped teenagers said that the soldiers violently broke into their homes and searched them causing excessive property damage.
In related news, soldiers invaded Sielet Al-Hartithiyya town, west of the northern West Bank city of Jenin, and kidnapped a former political prisoner identified as Ali Ibrahim Mahameed, 29.

Clashes and invasions have been reported in different parts of the occupied West bank, especially after four Palestinians were killed by Israeli fire and shells in the Gaza Strip.