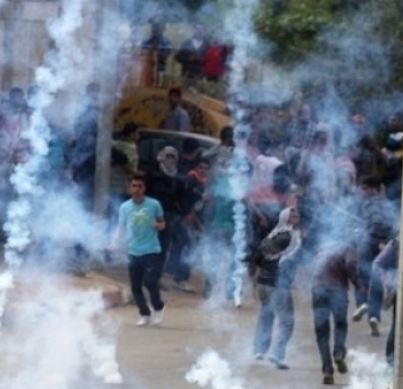 [Saturday November 2, 2013] Palestinian medical sources have reported that dozens of residents have been treated for the effects of tear gas inhalation after Israeli soldiers invaded Beit Awwa town, southwest of the southern West Bank city of Hebron.The sources said that the army invaded the town, during early dawn hours, and fired dozens of has bombs at several homes and streets.

Dozens of residents, including children, received treatment for the effects of teargas inhalation.

The army also installed roadblocks at the entrances of the town of Ithna, west of Hebron, the Al-Fawwar refugee camp, north of Hebron, the towns and Sa’ir and Shiokh, east of the city, and the Halhoul Bridge in the north.

The soldiers searched dozens of vehicles, and interrogated the residents while inspecting their ID cards.