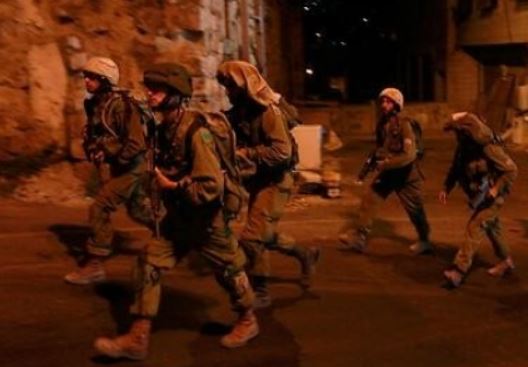 [Monday At Dawn November 4, 2013] Israeli soldiers invaded different parts of the occupied West Bank, and kidnapped at least eight Palestinians. Two Palestinians were shot and injured by army fire near Nablus.Eyewitnesses have reported that dozens of soldiers invaded Abu Dis town, in occupied East Jerusalem, broke into and ransacked the home of Nasser Jaffal, before kidnapping his son Issa, 19 years of age.

They added that the soldiers forced the family out of their home before violently searching it, and took their son to an unknown destination. Issa is a former political prisoner who spent 13 months in Israeli detention facilities.

In addition, Israeli police officers violently attacked Badawy Moneer Abu Jwei’ed from Al-Majd village, southwest of Hebron, as he was heading to work in the 1948 territories. He was moved to the Soroka Hospital in Beersheba (Be’er As-Sabe’).

The army also installed various roadblocks at the entrances of a number of villages and towns in the Hebron district, especially on the main road linking between Yatta and As-Samoa’ town, and the main entrance of Ithna town, west of the city.

Two more Palestinians have been taken prisoner after scores of soldiers invaded Awarta village, southeast of the northern West Bank city of Nablus, and violently searched several homes. One of the two residents has been identified as Ayman Darawsha.

Soldiers also invaded Beta town, south of Nablus, and drove into its streets, no arrests were reported.
On Monday morning, two Palestinian youths were shot and injured by Israeli military fire after dozens of soldiers invaded Jaba’ town, south of the northern West Bank city of Jenin. Dozens of residents suffered the effects of tear gas inhalation.

Medical sources said that Mohammad Mahmoud Alawna, 19 years of age, and Mo’een Nasser Alawna, 18, were shot by a rubber-coated bullets in their legs.

Soldiers also handed one resident, identified as Lafy Hassan Khaleeliyya, a military warrant ordering him to head to the Salem military base for interrogation.

The latest violations are part of ongoing Israeli invasions and assaults against the Palestinians, their property and lands, in different parts of the occupied West Bank.