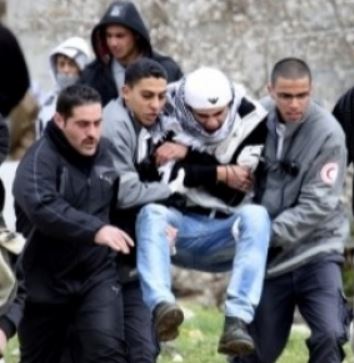 Local sources said that a number of soldiers occupied rooftops of several homes in Bab Az-Zaweya and used them to fire gas bombs and rubber-coated metal bullets at the Palestinian protesters.

All of the wounded Palestinians received treatment by field medics of the Palestinian Red Crescent Society.

The clashes took place after the Palestinians in the city held the funeral procession and burial ceremony of Anas Al-Atrash who was killed on Thursday evening at the Container roadblock, northeast of Bethlehem.

The Israeli military alleged that al-Atrash “attempted to stab a soldier at the roadblock” before soldiers noticed him and shot him dead.

On Thursday evening, soldiers stationed at the Za’tara roadblock, south of the northern West Bank city of Nablus, shot and killed a Palestinian, after alleging he tried to attack soldiers in the area using a fireworks gun.

Eyewitnesses said that the body of the Palestinian, Bashir Same Hananeen, 28, from Marka village near the northern West Bank city of Jenin, was seen lying next to the roadblock.

The army alleged he tried to attack soldiers in the area using a fireworks gun. The soldiers prevented the Palestinians from approaching, and closed the roadblock, forcing the residents to seek alternate routes.

His family strongly denounced his death, and said that the Israeli claims he carried the fireworks gun are just lies and manipulation of the truth, adding that Hananeen is a college teacher, ‘was executed in cold blood.’