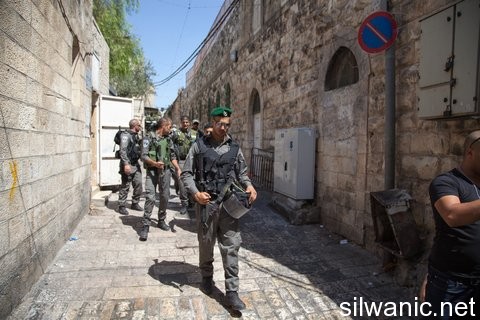 Head of the Wadi Helweh Information Center Jawad Seyam said that a young Palestinian woman and a young man were injured close to the Al-Aqsa Mosque.

The wounded have been identified as Diana Maragha, 15 years of age, and Baha’ Abu Tayeh.

Furthermore, a bird shop owned by Mousa Kash’am was partially burned in the area due to concussion grenades and gas bombs fired by the soldiers.

On Sunday evening and on Monday at dawn, soldiers invaded a number of areas in the West Bank city of Bethlehem, and kidnapped six Palestinians.

Also in Bethlehem, dozens of settlers gathered, on Sunday evening, at the western entrance of Teqoua’ town, east of the city, raised Israeli flags and harassed several residents.

Israeli soldiers were deployed in the area but did not attempt to remove the settlers, the Radio Bethlehem 2000 has reported.

Furthermore, soldiers placed a sand hill closing one of the entrances of the Khirbit Ad-Deir in Teqoua’.

The invasion took place amidst escalating attacks carried out by extremist Israeli settlers against the residents and their lands, including a recent attack when the settlers closed the western entrance of Teqoua’.