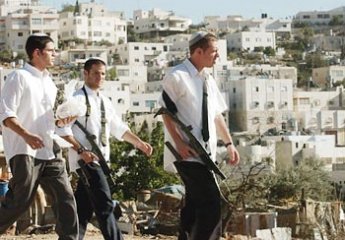 [Wednesday November 13, 2013] A number of extremist Israeli settlers invaded Palestinians lands, close to the “Samaria Highway” settler road, near the Bruqin village, west of the central West bank district of Salfit, and dumped toxins.Head of the Bruqin village council, lawyer Nafeth Barakat stated that a number of residents saw the settlers parked near the lands before dumping toxins in the Al-Baq’an area of the village.

He said that the toxins, mainly whitish and slimy with heavy toxic smell, were dumped only a 150 meters away from Palestinian homes, and that the residents contacted the Palestinian police who in turn called experts to examine the dumped materials.

Barkat further stated that the toxins led to the death of ten sheep that belong to a local farmer identified as Mohammad Samara.

Palestinian researcher Khaled Ma’aly stated that there are dozens of small and large factories that produce toxins in the industrial Ariel settlement, and Burkan settlement, surrounding the village, and that those settlements frequently flood Palestinian lands with wastewater in Salfit area, Bruqin and Kufr Ad-Deek.

Ma’aly added that those factories are also causing air pollution in the entire area.

He called on international and local human rights and legal groups to intervene, and to visit the area to observe the damage those toxins are causing, and the ongoing attacks and violations.