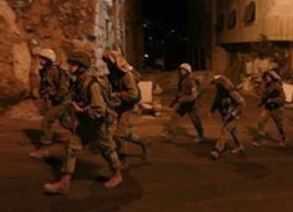 [Wednesday November 13, 2013] Dozens of Israeli soldiers invaded the village of Burin south of the northern West Bank city of Nablus, leading to clashes lasting until early dawn hours. Several residents and one soldier were injured; at least six Palestinians were kidnapped.Local sources have reported that dozens of local youths hurled stones and empty bottles at the invading soldiers, and that the army fired dozens of gas bombs, concussion grenades and rubber-coated metal bullets, in addition to rounds of live ammunition. Soldiers also broke into and searched dozens of homes.

An Israeli military jeep was damaged during the clashes and one soldier was mildly injured after being hit by a stone hurled by a local youth.

Medical sources said that several residents have been treated for the effects of tear gas inhalation.

The soldiers also detained dozens of youths, and interrogated them at a makeshift interrogation facility in the invaded village before kidnapped six of them.

The two kidnapped residents have been identified as Ahmad Al-Ghoul, head of the Fateh Youth Group in Silwan, and Mousa Al-Abbassy.

They were kidnapped from their homes in the Wad Qaddoum area, and Ras Al-‘Amoud in Silwan.