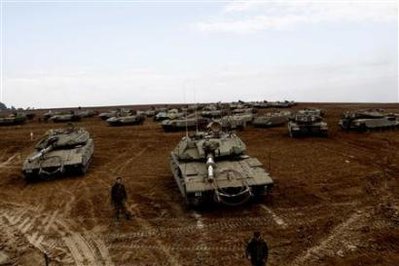 [Wednesday Morning November 13, 2013] A number of armored Israeli military vehicles and bulldozers carried out a limited invasion into Palestinian lands near khuza’a town, east of Khan Younis in the southern part of the Gaza Strip.The Maan News Agency quoted eyewitnesses stating that six armored bulldozers and several tanks, advanced dozens of meters into the area, while Israeli drones hovered overhead.

The bulldozers then uprooted Palestinian farmlands, while a number of soldiers fired dozens of rounds of live ammunition; no injuries have been reported.

In related news, Israeli Navy boats fired rounds of live ammunition at a number of Palestinian fishing boats in Palestinian territorial waters, in southern Gaza, forcing them back to the shore.

The attacks are part of ongoing violations against the Palestinian and their lands, especially in areas close to the border, in addition to frequent attacks against the fishermen.

When Israel imposed the illegal siege on Gaza in 2006, the fishermen were limited to only three nautical miles off the Gaza shore.

Yet, the fishermen and their boats were constantly attacked even within those three miles leading to dozens of casualties, and excessive property damage. The soldiers also took prisoner several fishermen.

As part of the ceasefire agreement of November 2012, Israel agreed to allow the Palestinians to fish within six nautical miles of the shore, but unilaterally decreased the allotted area to three miles.

Last May, Israel decided to allow the fishermen to fish within six nautical miles of the Gaza shore, but the Navy continued to attack them even within the three nautical miles.

Under the Oslo accords in the mid-nineties, the Palestinians are supposed to be allowed to fish in 20 nautical miles off the Gaza shore, but Tel Aviv constantly violated the agreement.