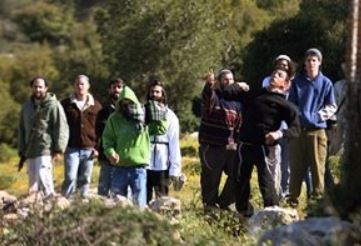 A number of extremist Israeli settlers invaded, on Wednesday [November 12, 2013] a Palestinian orchard east of Qarawat Bani Hassan village, west of the central West Bank district of Salfit.Head of the Qarawat Bani Hassan village council Abdul-Hamid Mer’ey stated that the settlers brought some citrus trees and planted them in the attacked land, close to their illegal settlement, in an attempt to claim that they have been harvesting the land for a long time.

He added that the attack is part of numerous attempts to illegally annex Palestinian lands in the area to adjacent illegal Israeli settlements and that the residents filed several appeals in Israeli courts and managed to limit the illegal annexation of their lands.

“The settlers frequently attack Palestinian lands and orchards in the area”, Mer’ey said, “They want to illegally grab our lands to expand their illegal settlements”.

He added that Israeli recently approved a plan meant to ensure the expansion of the Novim illegal settlement, built in 1986 on lands that belong to residents of Qarawat Bani Hassan and Deir Estia.