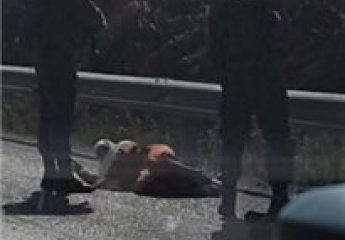 [Tuesday November 12, 2013] Israeli soldiers were caught on tape violently attacked a Palestinian woman at the Za’tara roadblock, near the northern West Bank city of Nablus.Speaking on condition of anonymity, the resident who documented the attack said that, as he was trying to cross the roadblock, he noticed Israeli soldiers shouting at the young woman, cursing at her, and threw her onto the ground.

After violently attacking her, the soldiers cuffed her and placed her in a police vehicle that initially took her to an unknown destination. She has been identified as We’am Samid Aseeda, 22, from Tal village, south of Nablus.

Her father said that he only knew about her arrest after receiving a phone call from a Palestinian lawyer who informed him his daughter was moved to the HaSharon Prison.

The Israeli army alleges that Aseeda attempted to stab an Israeli soldier on the roadblock.

The army initially moved her to the Ariel police station in Ariel settlement bloc, in the northern part of the West Bank.