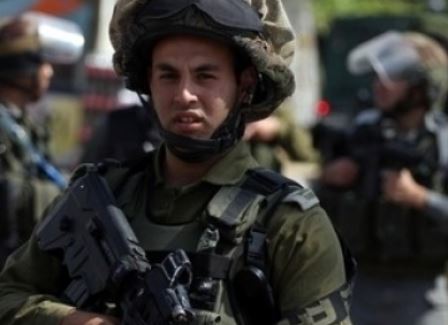 [Tuesday November 12, 2013] Palestinian medical sources have reported that several residents have been injured by Israeli army fire in Hebron city, in the southern part of the occupied West Bank, and in the Al-Arroub and Al-Fawwar refugee camps in the city, and Beit Ummar nearby town.The sources said that, as hundreds of residents were marking the ninth anniversary of the death of late President Yasser Arafat, Israeli soldiers violently attacked them firing gas bombs and rubber-coated metal bullets.

The attacks took place in Bab Az-Zaweya and Tareq Ben Ziad areas in the city; dozens suffered the effects of teargas inhalation, while four were shot by rubber-coated metal bullets.

The fourth injured resident, identified as Mohammad Abu Sel, 17, was shot by a gas bomb in his face, and was moved to the Al-Ahli Hospital.

Furthermore, a number of soldiers occupied the rooftop of a home in the center of the Al-Arroub refugee camp, and used it to fire dozens of gas bombs and concussion grenades leading to dozens of injuries.

Several families, living in nearby homes, had to leave their property due to large amounts of gas bombs fired by the soldiers.

Soldiers also invaded the Al-Fawwar refugee camp and fired dozens of gas bombs at local youths who hurled stones at them; dozens have been treated for the effects of tear gas inhalation.

Media sources in Hebron said that the soldiers installed several roadblocks at the entrances of Hebron and its nearby towns.

Medical sources in Beit Ummar, north of Hebron, said that two Palestinians were shot by rubber-coated metal bullets fired by the invading soldiers, while dozens have been treated for the effects of teargas inhalation.

In related news, a young woman identified as Zeina Omar Awad, 21, was injured after being rammed by a settler’s vehicle at the main entrance of Beit Ummar. She suffered cuts and bruises, while the settler fled the scene.