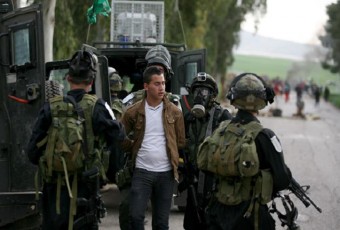 All kidnapped children were cuffed, blindfolded and were moved to the Gush Etzion military base.

Furthermore, soldiers invaded Dar Salah village, east of Bethlehem, broke into the home of Ghazi Ismael Salah, and hand his son Tha’er, 19, a military warrant ordering him to head to Gush Etzion for interrogation.

Dozens of soldiers also invaded the Qaryoun neighborhood, in the Old City of the northern West Bank city of Nablus, and kidnapped Mohammad Herzallah, 22.

The army violently broke into and searched the property, and assaulted Herzallah’s father.