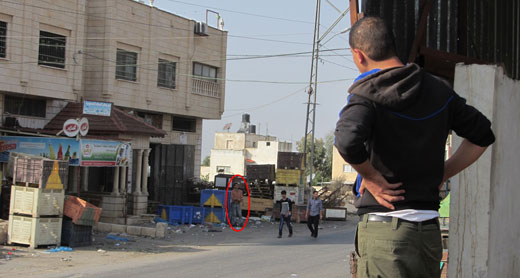 A young Palestinian, Ahmad Tazaz’ah, was killed by Israeli troops on October 31st in Qabatiya, south of Jenin. While the Israeli military has claimed that Tazaz’ah was not killed by Israeli forces, but had been previously killed in internal clashes between Palestinian factions, the extensive investigation by B’Tselem including both physical evidence and exhaustive eyewitness accounts directly contradicts that claim, and has led the army to agree to carry out its own ‘limited’ investigation.Following the killing of the young man, the Israeli military spokesperson went on national tv and claimed that the 20-year old Tazaz’ah had not been killed by the invading Israeli troops, but had been previously killed in an internal clash – despite a total lack of evidence for this claim. No Israeli media questioned the military’s claim, and no investigation of the killing was done by any official Israeli entity.

But the non-governmental human rights organization B’Tselem took it upon itself to investigate the October 31st killing, and went to the village where Tazaz’ah was killed to gather accounts from eyewitnesses and evidence.

Their investigation found that Israeli forces used live ammunition in a situation where none was warranted, and fired directly at Tazaz’ah’s chest without cause.

According to their report, “Inquiries by B’Tselem field researcher ‘Atef Abu a-Rub found that on 31 October 2013…at least seven military vehicles entered Qabatiya as part of an arrest operation….Some 15 Palestinian youths who were at the market at the time began throwing stones at the vehicles as they went by.

“According to eyewitness accounts, it was at that point that a few of the military vehicles stopped on the road across from the market and several soldiers got out. The soldiers stationed themselves across from the market, on the other side of the road, about 35 meters north of the market entrance. The soldiers fired tear-gas grenades and lobbed stun grenades at the youths, who persisted in throwing stones. Witnesses also said that they heard a few solitary shots of live ammunition.

“About ten minutes later, at 5:25 AM, Ahmad Tazaz’ah approached the site of the clashes near the entrance to the market, and peeked out at the soldiers from the market entrance, where the fence that separates the road from the market ends. According to the eyewitness accounts, Tazaz’ah was immediately hit by a bullet to the chest. After he was hit, he ran a short distance back into the market and collapsed. Medical reports indicate that a live bullet penetrated Tazaz’ah’s chest between the second and third ribs, exiting through his back. Shortly after, the soldiers got back into the vehicles and drove off. The B’Tselem field researcher who came to the site of the shooting about two hours after the incident found three empty shells near where the soldiers had stood. The shells were taken by Palestinian security authorities.

“Security cameras in the area of the market caught parts of the incident on film. The video footage shows the military vehicles driving on the road near the market and the moment when Tazaz’ah was hit by the bullet. The footage also sheds light on the timing of the shooting.

“Tazaz’ah was rushed in a private car to the hospital in Jenin. According to hospital records, Tazaz’ah arrived there at 5:45 AM. He was already dead.”

One of the eyewitnesses to the shooting of Ahmad Tazaz;ah was his uncle, Tamer Tazaz’ah, 26, who works in a vegetable store near the market in Qabatiya where the incident took place. He told B’Tselem field workers, “Ahmad and I were standing near the store at the entrance to the market when the soldiers stopped near the market. At first, the soldiers fired stun grenades and tear-gas grenades in the direction of the market. They were standing about 30 meters away from the market. The young men kept throwing stones. I tried to convince Ahmad to stay with me, but he told me he wanted to go to his store so he’d be on hand for a vegetable order. I insisted, and asked him to stay and sit with me, but within a minute, he was gone. I then saw him at the entrance to his store. At that moment, I saw a young man standing on the fence that separates the market from the road, looking at the soldiers on the road.

“I heard a live bullet being fired in the air, a warning shot that he’s not allowed to stand there. The young man stepped back immediately. Ahmad went to the same spot, and approached the entrance to the market, where the fence ends. He was about 10-15 meters away from where I was standing. As soon as he got to the edge of the fence, I heard a shot. I didn’t know what kind of bullet it was. Ahmad ran back, a distance of about 10 meters, and then collapsed on the ground. I thought he’d just tripped. I didn’t realize he’d been injured. At that moment, I heard someone say he’d been hit, and I quickly ran over to see him, but the people who were standing there tried to keep me away. It was about 5:25 AM.”