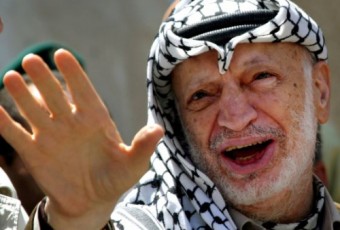 Palestinian official Nasser Al-Qodwa stated that the report released by the committee that investigated the death of late Palestinian President Yasser Arafat revealed that the leader was poisoned to death, and added that Israel is directly responsible for his assassination.His statements came Sunday at a press conference in the central West Bank city of Ramallah.

Al-Qodwa said that even the report of the French Hospital where Arafat took his last breath gave clear indications that Arafat was poisoned to death.

He added that the most conclusive report was the report of the Swiss forensic center that supports the belief that Arafat was poisoned by Polonium.

Al-Qodwa, the nephew of the late president, said that Israel is directly behind the assassination of the Palestinian leader, and that although France did not grant clear proofs, or accusations, it gave clear indications that lead to the conclusion that Arafat had been assassinated.

“Of course, we need to find the traitor who physically administered the poison, but this is a criminal investigation”, he said, “Israel as a state, is a country has access to Polonium, had the capability to assassinate the late leader, and expressed clear interest in getting rid of him”.

The Palestinians believe Israel, that surrounded Arafat’s in his compound in 2002, until he fell seriously ill and was airlifted to France, is behind the assassination of Arafat, especially since Israeli leaders kept labeling him as an “obstacle to peace”, and clearly pointed out “the need to get rid of him”.

Israel also bombarded sections of the compound, and bulldozed other sections, in addition to cutting power and water supplies, and phone lines.

Israeli sharpshooters also topped several surrounding buildings overlooking the office of Arafat, and killed five Palestinians in the compound, including personal bodyguards of Arafat; at least 40 were injured and 70 were kidnapped.

The then-Israeli Prime Minister Ariel Sharon said in a press conference, “invading Ramallah and the isolation of Arafat is only the beginning of an extended military offensive that aims at uprooting the infrastructure of terrorism”.

Sharon also described Arafat as the enemy of Israel and did not hide Israel’s interest in removing him from power.

Several Israeli leaders also said, “Arafat is an obstacle to peace” and expressed explicit interest in getting rid of him despite a statement by the then-Defense Minister, Benjamin Eliezer, who claimed that Israel is not planning to harm Arafat.

While under siege, Arafat said; “they want me to become their prisoner, or wanted, or dead; and I tell them I am a martyr, a martyr a martyr”.