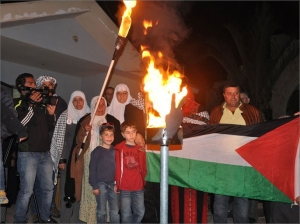 The Israeli government is considering forcing Palestinian detainees from Jerusalem and historic Palestine into exile should they be released under an agreement with the Palestinian Authority.The detainees have been imprisoned since before the first Oslo Agreement of 1994.

A number of Arab members of the Israeli Knesset visited veteran Palestinian detainees who told them that “not being released this December would be an act of betrayal against them”, and “a sort of capital punishment imposed on them by Palestinian negotiators.”

They urged the Palestinian Authority (PA) not to succumb to Israeli pressure, and said that they will not accept to be forced into exile in return for their release. They are demanding to be sent home once they are freed.

The Wattan News Agency has reported that Arab Mk’s Basel Ghattas and Ibrahim Sarsour met a number of senior Palestinian political leaders held by Israel, including Marwan Barghouthi, who said that all Jerusalem and historic Palestine detainees must be released during the third phase.

Ghattas told the Qatar-based Al-Jazeera that the detained leaders said all detainees refuse to be exiled from Palestine in return for their release, adding that this issue resembles one of the ways Israel avoids implementing its agreements and vows.

He further stated that the release of all 104 veteran detainees has nothing to do with the progress of peace talks, as the talks were resumed in exchange of having the P.A. suspend its lawsuits against Israel in International Courts.

On his part, Sarsour said Israel has been using the issue of the detainees to blackmail the P.A into providing more concessions on core issues, while the steadfastness and the ongoing struggle of the detainees themselves has always been strong.