33 Palestinians Killed Due To Israeli Violations This Year 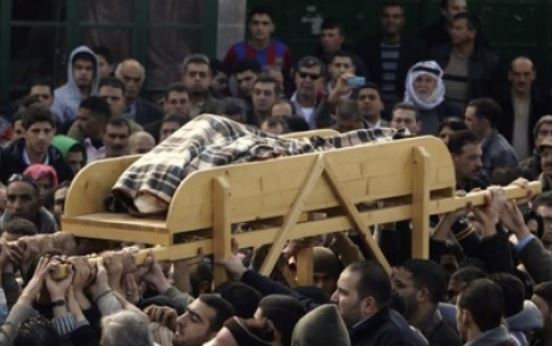 Back in January of this year, a former political prisoner identified as Ashraf Abu Threi’, from Hebron, in the southern part of the West Bank, died of serious injuries. He was seriously injured after being shot by army fire, nearly four months after he was released from an Israeli prison. He died of his injuries after falling into a coma.

In addition, three Palestinian detainees died this year due to torture and lack of adequate medical care and treatment.

Detainee Ashraf Abu Hamdiyya, 64 years of age from Hebron, passed away on April 2 at the Soroka Israeli Hospital, shortly after he was hospitalized at an Israeli hospital. He suffered with several varieties of cancer, but was not sent to any specialized facility until his health condition became very serious.

Arafat Jaradat, 30, also from Hebron, died on January 23, only a few days after he was taken prisoner, as he was brutally tortured during interrogation.

On November 4, detainee Hasan Abdul-Halim Toraby, 22 years of age, died at the Al-‘Affoula Israeli Hospital after being denied essential medical treatment. He was merely moved to a hospital after a severe deterioration in his condition.

Palestinians Killed In The Gaza Strip

On January 11, Anwar Mohammad Al-Mamlouk, 18, was shot and killed by Israeli military fire east of the Jabalia refugee camp, in the northern part of the Gaza Strip. He was hunting birds when the soldiers shot him.

On January 14, soldiers shot and killed Mustafa Abu Jarad, 21, in the northern part of the Gaza Strip, while he was working on his land.

On April 30, the Israeli Air Force fired missile into Gaza city, killing a Palestinian fighter identified as Haitham Al-Mishal, 29, from the Shaty’ refugee camp, northwest of the city. He was fatally wounded when the army fired a missile at the motorcycle he was driving in Gaza.

On August 10, the army opened fire at a number of Palestinians gathering east of the Al-Boreij refugee camp, in central Gaza, killing Hussein Awadallah, 30, from the Nuseirat refugee camp.

On August 30, Israeli soldiers shot and killed Hweishel Isamel Abu Hweishel, 36, as he tried to enter Israel illegally, searching for work. He is from the Al-Mighraba in central Gaza.

Palestinians Killed In The West Bank

On March 7, resident Mohammad Samih Asfour, 22, died due to serious injuries suffered two weeks earlier, during clashes with Israeli soldiers invading ‘Aboud village, west of Ramallah. He was wounded on February 22 during a protest held in solidarity with hunger striking Palestinian detainees.

On March 12, soldiers shot and killed Mahmoud Adel Teety, 25, and injured several others as the army invaded the Al-Fawwar refugee camp, in Hebron.

On March 15, resident Moayyad Ghazawna, 35, from the Al-Ram town, north of Jerusalem, died of wounds suffered three weeks earlier, after he was shot in the head by a high velocity gas bomb fired by an Israeli soldier.

On April 3, soldiers shot and killed two Palestinians identified as Ammar Nassar, 17, and Naji Al-Balbeesy, at the Ennab roadblock, near the northern West Bank city of Tulkarem.

On July 2, resident Mo’taz Sharawna, 19, was killed after being rammed by an Israeli jeep invading Doura town, near Hebron.

On August 25, residents Robin Zayed, 32, and Jihad Aslan, 19, and Younis Jamal Jahjouh, 22, were shot and killed by live rounds fired by the Israeli soldiers invading the Qalandia refugee camp, north of Jerusalem; dozens have been injured.

On August 31, Karim Abu Sbeih, 17, died of wounds suffered on August 20, after being shot by live ammunition fired by Israeli soldiers invading the Jenin refugee camp.

On September 18, soldiers shot and killed Islam Tubassy, 17, after breaking into his family’s house, and holding his ID card. His family said that he was executed in cold blood.

On October 22, soldiers shot and killed Mohammad Waddah ‘Assy, 25, after surrounding him in a cave he took as a hideout. He clashed with the invading soldiers who fired hundreds of rounds of live ammunition and various grenades.

Several Palestinians have been wounded during clashes that took place after his death.

On November 7, Fuad al-Atrash, 23 years of age, was shot and killed by Israeli military fire at the Container Roadblock, northeast of the West Bank city of Bethlehem.

Also on November 7, soldiers stationed at the Za’tara roadblock, south of the northern West Bank city of Nablus, shot and killed Bashir Samer Hananeen, 28, after alleging that he tried to attack soldiers in the area using a fireworks gun.

On October 17, 2013, soldiers stationed at a military base close to the Qalandia terminal, north of occupied Jerusalem, shot and killed a Palestinian driving a bulldozer, after he allegedly drove into the base to attack soldiers. His family denied the Israeli claims; he was identified as Younis Radayda, 30.

On October 22, resident Abdul-Hafith Tayyem, 76, died of serious injuries suffered after being hit by a settler’s speeding vehicle in the Al-Fondoq town, near the northern West Bank city of Qalqilia.

Head of the Ahrar Center Fuad Al-Khoffash said that the Israeli attacks and violations are ongoing, and that the army is still targeting Palestinian villagers, farmers and fishermen, in addition to targeting students, women, children and elderly in different parts of the occupied West Bank, including occupied East Jerusalem, and the Gaza Strip.