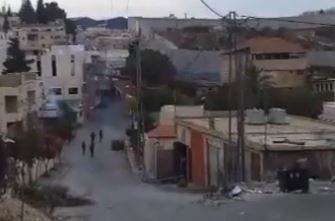 [Saturday Evening November 23, 2013] Palestinian medical sources have reported that at least fifteen Palestinians have been injured by Israeli army fire during clashes that took place after Israeli soldiers invaded the Al-Jalazonerefugee camp, north of the central West Bank city of RamallahThe sources stated that violent clashes took place after dozens of soldiers invaded the camp, and assaulted a number of residents. Local youths then hurled stones and empty bottles at the invading soldiers.

One of the wounded, currently in a serious condition, was shot by four live rounds in his leg, media sources in the camp have reported. Most of the wounded have been moved to the Palestine Medical Center in Ramallah.

They added that, as dozens of soldiers invaded the camp, dozens of local youths chased them in its alleys, throwing stones and empty bottles at them.

In related news, dozens of soldiers invaded the Aida refugee camp, north of Bethlehem, and clashes with dozens of local youths.