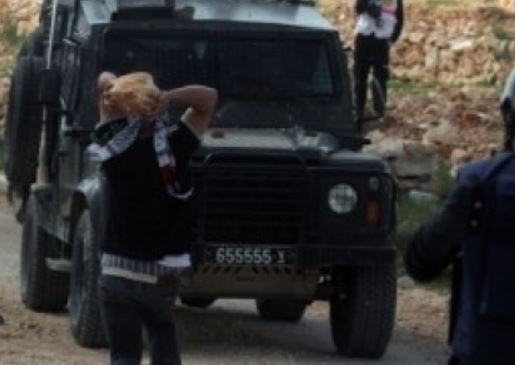 Israeli soldiers kidnapped, on Sunday at dawn and on Saturday evening, several Palestinians in different parts of the occupied West Bank, and in the Gaza Strip. Most of the invasions and arrests took place in the Hebron District, in southern West Bank.Mohammad Awad, spokesperson of the Popular Committee against the Wall and settlements in Beit Ummar, north of Hebron, said that dozens of soldiers invaded the town, and kidnapped Montaser Abdul-Hamid Awad, 22.

He added that Awad is a former political prisoner who spent two years in Israeli prisons. He was taken prisoner, on Sunday at dawn, after the soldiers violently broke into his house, and searched it causing excessive damage.

Dozens of soldiers also invaded Doura city, southwest of Hebron, broke into a home and kidnapped one resident identified as Noureddin Mohammad Wishah, and took him to an unknown destination.

Furthermore, Israeli military sources stated that the soldiers kidnapped two Palestinians in Beit Ola village, near Hebron, one of them identified as Ibrahim Ahmad Al-‘Adam. Another Palestinian has been kidnapped in Beit Awwa town, and another in Hebron city.

On Sunday at dawn, soldiers installed a roadblock on the Halhoul Bridge, north of Hebron, while dozens of soldiers invaded a number of neighborhoods in Hebron city, and in Nouba village, west of Hebron.

Medical sources said that the soldiers attacked, and injured, Ahmad Suleiman Al-‘Emla, 22, from Beit Ola village, and Adham Jamal Saya’ra, 20, from Kharas village. Both were working near Ramadeen village, south of Hebron; they suffered moderate injuries and were moved to the Hebron Governmental Hospital.

Local sources in the Jenin refugee camp, in the northern West Bank city of Jenin, said that at least fifteen military vehicles invaded the camp, and fired dozens of rounds of live ammunition.

Soldiers then broke into a number of homes, and violently searching them, using some as monitoring towers, and kidnapped two Palestinians identified as Ahmad Abu Zeina, 25, and Tawfiq Saber Jarjou’, 26.

The invasion lasted for three hours, while Israeli sharpshooters were seen taking positions on rooftops in the camp.

Furthermore, Israeli military sources said that resident Odai Bassem Al-Jamry, 16, from the Balata refugee camp in the northern West Bank city of Nablus, has been taken prisoner in Haifa, allegedly after he attempted to stab an Israeli soldier.

His father is a Palestinian security officer; the soldiers searched his home, and confiscated a computer and other equipment.

In related news, soldiers kidnapped three Palestinians near a Kibbutz close to the border with Gaza, in an area east of the Al-Boreij refugee camp, in central Gaza.

The army said that the three were not armed, and were taken prisoner after approaching the border fence. They were moved to an undisclosed interrogation facility.