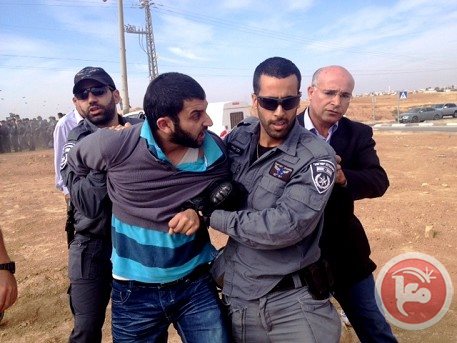 A visit by several Israeli legislators to the Negev desert in southern Israel Sunday was met by protests organized by local residents opposed to the Israeli plan to forcibly remove them from their ancestral land. That plan has been dubbed the ‘Prawer Plan’, and would involve the forced displacement of thousands of Palestinian Bedouins who have lived for hundreds of years in the Negev desert, in the southern part of what is now Israel.The protest on Sunday followed outbursts last week in the Israeli Knesset (Parliament) by several Arab Members of the Knesset. MK Ahmed Tibi said, “’You’ve gone too far. This law is a mark of Cain on the forehead of the Knesset, and the shame is on the forehead of every one of you who supports this bill. What would you do if there was a plan to drive you out of your homes? Any reasonable person cries out, protests, expresses outrage, he is angry. He responds to the aggression.”

During Sunday’s protest, four protesters were wounded by Israeli police forces who attacked the non-violent demonstration, and two were abducted. The abductees were identified as an employee of the al-Mezan Center for Human Rights, who was on the scene as a human rights observer, and a resident of the Bedouin village of Rafat, identified as Yunis Moussa Abu Abed.

The Knesset Committee whose visit prompted the protest was formed to implement the Prawer Plan for mass displacement of the Palestinian Bedouins from their ancestral homes. While Israeli lawmakers argued that the forced displacement was necessary, and that the Bedouins would be moved into reservations created by the Israeli government, the Bedouin’s representatives pointed out that similar reservations set up by the Israeli government in the past have been neglected and lacking in infrastructure and government support.

40,000 Palestinian Bedouins are scheduled to be forcibly displaced from their land by the Prawer Plan, which has been approved by the Israeli Knesset and only awaits implementation.