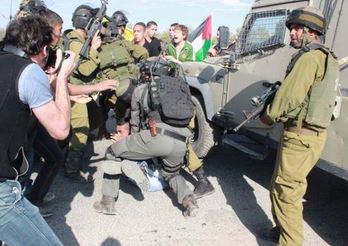 [Monday At Dawn November 25, 2013] Dozens of Israeli soldiers invaded the al-Obeydiyya town, east of the West Bank city of Bethlehem, and al-Khader town, south of Bethlehem, and kidnapped three Palestinians.Local sources have reported that the soldiers broke into a number of homes, and violently searched them, before kidnapping two Palestinians.

The kidnapped have been identified as Yousef Jamal Hasasna, 17, and Husam Omar Hasasna, 15. The two were cuffed, blindfolded and were moved to an undisclosed location.

Furthermore, soldiers invaded the al-Khader town and broke into the home of Mohammad Atwan, before kidnapping his son Rizeq, 19.

Local sources said that the soldiers invaded the western neighborhood and kidnapped Mahmoud while standing in front of his home. The invasion led to clashes with local youths.

At least ten Palestinians children have been taken prisoner by the Israeli army in the town over the last ten days, and are currently awaiting trial allegedly for throwing rocks at Israeli soldiers.