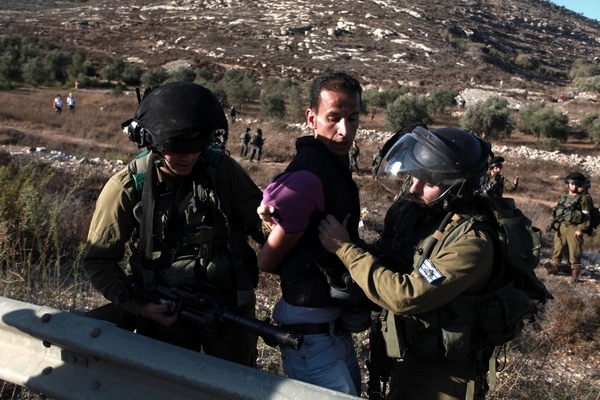 [Monday November 25, 2013] Israeli soldiers invaded dozens of communities in different parts of the occupied West Bank, broke into and violently searched dozens of homes, and kidnapped at least 12 Palestinians.Local sources in Hebron, in the southern part of the occupied West Bank have reported that the army invaded the Old City and kidnapped Rasmy Mahmoud Al-‘Ajlouny, 30, Amir Najeh Al-’Ajlouni, 18, and Nassar Abu Merzer, 21.

Furthermore, dozens of soldiers installed roadblocks near Ithna town, west of Hebron, completely sealing it, and prevented the residents from entering or leaving the town.

Undercover soldiers of the Israeli army invaded the Jenin refugee camp, in the northern West Bank city of Jenin, and kidnapped three Palestinians.

The invasion was carried out by undercover forces driving cars with Palestinian license plates before regular units invaded the camp.

Soldiers fired several concussion grenades, flares, gas bombs and rubber-coated metal bullets during clashes with local youths who hurled stones at them during the invasion.

In Bethlehem, dozens of soldiers invaded the towns of Al-Khader and Al-Obeydiyya, broke into and searched several homes before kidnapping four teenagers.

On Sunday evening, soldiers kidnapped two teachers, and one student, near the Al-Aqsa Mosque, in occupied East Jerusalem.

The Al-Aqsa Foundation for Waqf and Heritage said that the soldiers kidnapped Hanadi al-Hilwani, and her colleague Zeina Amro, in addition to a student identified as ‘Alaa’ Abu Al-Haija.

The invasions are part of ongoing violations carried out by Israeli soldiers and extremist Israeli settlers in different parts of occupied Palestine, including in and around occupied Jerusalem.