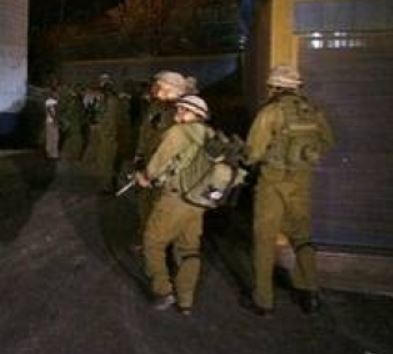 [Wednesday, November 27, 2013] Palestinian medical sources in Hebron, in the southern part of the occupied West Bank, have reported that (at least) dozens of Palestinians have been injured during clashes with Israeli soldiers. Some of the wounded have been shot by rounds of live ammunition.Sources say that the clashes took place in various regions of the Hebron District, and that Red Crescent medics have confirmed that at least seven Palestinians have been shot by rounds of live ammunition, and 27 by rubber-coated metal bullets. Dozens suffered the effects of tear gas inhalation.

Head of the Disasters Unit of the Red Crescent in Hebron, Nasser Qabaja, stated that eight injured Palestinians were moved to the Hebron Governmental Hospital after being hit by rubber-coated metal bullets in the Bab AZ-Zaweya area of Hebron, while 19 received treatment not requiring hospitalization. Furthermore, a young Palestinian man was hit by a live round, in his left knee, and underwent surgery at the hospital.

In addition, at least 14 students of the Zahra’ School for girls, in southern Hebron, suffered the effects of tear gas inhalation, after the army fired several gas bombs at their school.

Many Palestinians also received treatment by field medics in Beit Ummar town, near Hebron, and in the Halhoul Bridge area.
Six more Palestinians were shot with live rounds in the lowers parts of their bodies. Their injuries have been described as mild-to-moderate.

The Red Crescent Society in Hebron stated that the three have been identified as Mahmoud Khaled Najjar and Mohammad Mousa Fansha, both from Yatta, and Mohammad Fuad Nairoukh from Hebron.