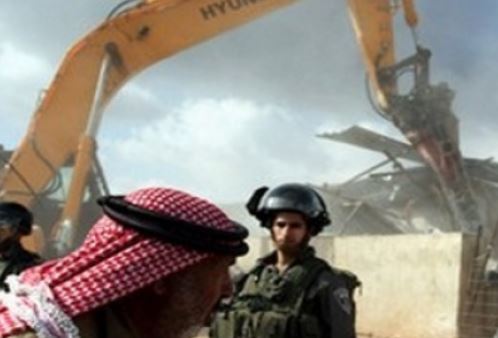 [November 28, 2013] Dozens of Israeli soldiers invade Deir Ballout, demolish unfinished home.Property owner Ghanem Mahmoud Abdul-Karim stated that Israeli military bulldozers, accompanied by several armored jeeps, entered Deir Ballout town, west of the Central West Bank district of Salfit, at approximately 5 am, Thursday, and demolished his property. He stated that the demolished structure is 150 square/meters, and that the army previously served him three warrants against his property, alleging “it is not in the zoning area” of the town.

Abdul-Karim added that the army warned residents that any property built in the area would be demolished.

Israel imposes various restrictions on Palestinians in areas which fall under Israeli military and administrative control, in order to keep them away from the illegal annexation wall and to separate residents from their lands, isolating several communities and enabling its own illegal settlement construction and expansion activities.

According to data previously compiled by the Israeli Committee Against House Demolitions (ICAHD), Israel has demolished more than 27,000 Palestinian homes and structures since the 1967 six-day war, when it began occupying the West Bank, East Jerusalem and the Gaza Strip.

Home demolition is an act of collective punishment which affects entire families and one which is in direct violation of International Law and the Fourth Geneva Convention, to which Israel is a signatory.