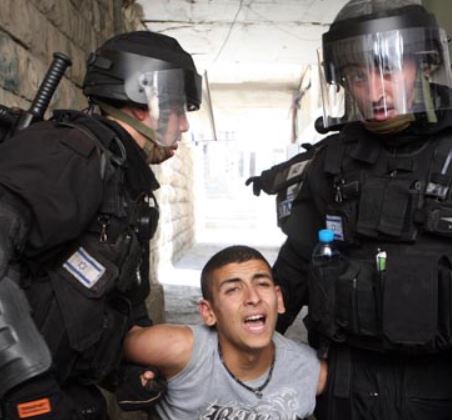 [Wednesday Evening, November 27, 2013] Israeli soldiers and police officers kidnap three Palestinians, including two children, in occupied Jerusalem. Soldiers attack protesters near the city.Eyewitnesses state that the soldiers kidnapped Rami Dandees, 14, Majdi Al-Hadra, 14, and Bashar Al-Mashny, 27. They were all cuffed and blindfolded, before being moved to an interrogation facility in the Salah Ed-Deen area, in the occupied city. Furthermore, soldiers violently attacked dozens of Palestinians in Al-Ezariyya and Abu Dis, also in occupied Jerusalem. They were protesting the death of three Palestinians shot and killed by Israeli military fire in Hebron, in the southern part of the West Bank.

In related news, soldiers stationed at the Huwwara roadblock, south of the northern West Bank city of Nablus, kidnapped a Palestinian child, on Thursday at night. Local sources report that the soldiers closed the roadblock for more than 30 minutes, searched dozens of vehicles and interrogated the residents before kidnapping Mo’men Mazen Hneidy, 14.