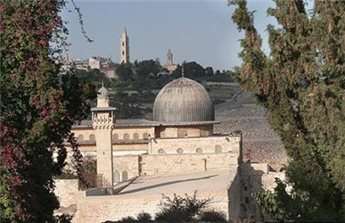 Israeli municipal authorities in Jerusalem are planning to require mosques to lower the volume of the Muslim call to prayer, the Grand Mufti of Jerusalem said in a statement, Sunday.
‘Mosques in Palestine, in general, and in Jerusalem in particular, have been targets of a vicious campaign by the occupation authorities,’ Muhammad Hussein said in the statement.

The mufti condemned the plans, saying that Muslim authorities were the only ones who had the right to intervene in mosque affairs.

‘The occupation authorities make light of all heavenly laws and international law, as they follow a systematic plan designed to efface all Arab and Palestinian landmarks in Palestine and replace them with Jewish landmarks.’

Palestinian officials frequently condemn what they refer to as the ‘Judaization of Jerusalem’ on the part of Israeli authorities, saying that they engage in discriminatory policies which discriminate against Palestinian residents, seeking to encourage their departure from the city.

East Jerusalem has been occupied by Israel since 1967.