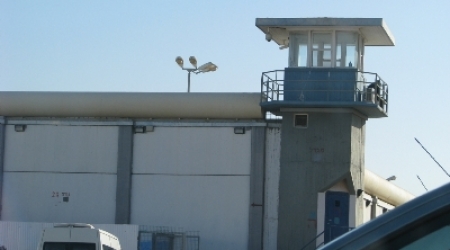 A number of Palestinian Prisoners in Shatta prison were injured, last Thursday, when Israeli forces raided cells 7 and 10 ,in the prison, smashed their belongings and sabotaged the section.Some of the prisoners were cuffed and forced into other cells, the prisoners told the lawyer of the Prisoner’s Club Society who visited them, according to Al Ray Palestinian Media Agency.

The cells were thoroughly searched and the prisoners’ belongings were smashed and prisoner Ali Sbaih was injured, according to the prisoners.

They mentioned that Israeli Prison Services decided to impose punishment measures on the prisoners, including withdrawal of electrical devices and denial of movement out of and in between prison cells.

IPS threatened them with imposition of financial punishments.

For his part, the prisoners’ representative inside the prison said that a message was sent to the IPS, telling them that the prisoners will take protest actions in case the punishments are not cancelled.

The lives of a great number of hunger striking Palestinian prisoners are at stake, according to Hanan Al-Khateeb, an attorney working with the Ministry of Prisoners, WAFA reports.

She added that prisoners face life-threatening conditions; almost all prisoners vomit blood and suffer severe pain throughout their bodies. Heart conditions and serious weight loss, in addition to hearing and vision impairment are regularly reported.

Al-Khateeb pointed out several cases of inhumane treatment, by the Prison Authority, against the hunger striking prisoners, including threats to use compulsory feeding, lack of sufficient blankets and hand-cuffing in hospitals.

79 Gaza residents left the coastal enclave, on Monday morning, via Beit Hanoun crossing, Erz, to visit their relatives in the Israeli jails, according to the International Committee for the Red Cross (ICRC).

About 5,000 Palestinian prisoners are held behind Israeli bars.