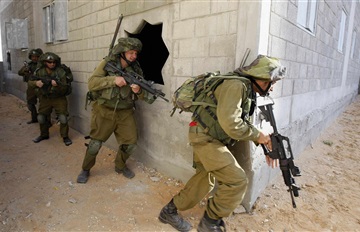 Soldiers also invaded a store in the village and searched it, causing excessive property damage. The store belongs to resident Zakariyya as-Saâ€™dy.

The soldiers withdrew from the village later on; no arrests have been reported.

In related news, soldiers invaded Yabâ€™ad town, near Jenin, and drove around while provoking local residents; no arrests have been reported.