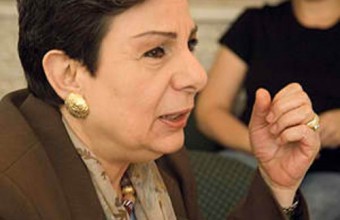 PLO Executive Committee Member Dr. Hanan Ashrawi recently stressed on the essential role of Britain and of Europe in exercising a corrective influence on negotiations, bringing Israel to compliance, and putting an end to Israeli intransigence and violations.The PNN reports that Ashrawi’s statements came during her meeting with the newly appointed British Consul General, Dr. Alastair McPhail, at the PLO Headquarters in Ramallah.

Ashrawi welcomed the Consul General to Palestine and said, ‘Both the Israeli and American governments must come to terms with the requirements for peace and justice, and understand that the key to genuine security is the realization of Palestinian rights, not the perpetuation of Israel’s illegal system of colonization and ethnic cleansing.’

During the political briefing with Dr. McPhail, Dr. Ashrawi discussed the ongoing negotiations, Israeli violations on the ground, British-Palestinian relations, and issues of mutual cooperation.