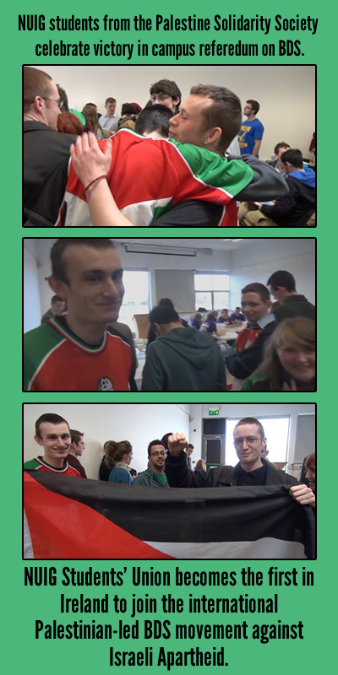 The Ireland-Palestine Solidarity Campaign (IPSC) welcomed, in a press release, the passing of motion calling on the National University of Galway (NUIG) Students’ Union to actively participate in the Palestinian-led Boycott, Divestment and Sanctions campaign against Israel, until it ends the occupation of Palestine and complies with its obligations under international law.The PNN reports that the motion, which states the ‘NUI Galway Students’ Union actively supports the campaign of Boycott, Divestment and Sanctions against the State of Israel’ was passed by an almost 2 to 1 margin (1,954 to 1,054 votes) during a student referendum, held on March 6th.

NUIG Students’ Union becomes the first student’s union in Ireland to adopt such a motion in support of Palestinian rights, and joins campuses from all over the world in rejecting Israeli apartheid.

Chairperson of the IPSC, Martin O’Quigley, welcomed the motion saying, ‘This is an historic victory for those who stand in solidarity with Palestinians living under the heel of Israel’s racist, apartheid system of occupation and colonization.