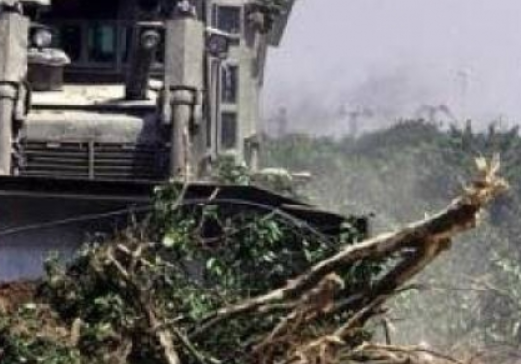 [Sunday Evening, March 09, 2014] Israeli soldiers invaded Palestinian farmlands in the al-Khader town, south of the West Bank city of Bethlehem, and uprooted them.Ahmad Salah, coordinator of the Popular Committee Against the Wall and Settlements in al-Khader, said that several Israeli military vehicles and bulldozers uprooted farmlands in the al-Kishk area.

The attacked lands are close to the illegitimate Israeli settlement of Efrat, built on lands which belong to residents of the al-Kader, the Palestinian Public Broadcasting Corporation (PPBC) has reported.

Salah stated that a number of fanatic settlers recently installed mobile homes in the area, in preparation to install an outpost, and illegally occupy privately owned Palestinian lands.

He added that the attack is part of repeated attempts to expand the settlement, especially amidst an escalating campaign, by soldiers and settlers, against Palestinian orchards, and villagers, in the area.

In related news, WAFA reports that Israeli settlers attacked, on Monday, private Palestinian farmland in An-Nabi Samuil, to the northwest of Jerusalem.

Israeli settlers from Har Shmuel settlement cut the fence surrounding the farmland and opened a new road through it, chopping down many trees and saplings, according to the farmland owner.