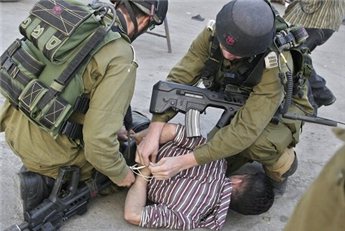 [Monday, March 10, 2014] Israeli soldiers invaded various Palestinian communities in the occupied West Bank, installed roadblocks, broke into homes and searched them, kidnapping twelve Palestinians.Local sources in the southern West Bank city of Hebron have reported that the army kidnapped nine Palestinians after invading their homes, in the al-Ja’bary neighborhood, and violently searching them.

Eyewitnesses said that the soldiers invaded Tal village, south of Nablus, kidnapping Walid Jamal Aseeda, 23. Aseeda, a former political prisoner, is a student of the Najah University in Nablus.

In addition, the army invaded the Ta’awon Street area, in Nablus, forced resident Ammar Yasser Abu Za’rour, 24, out of his home, keeping him under the rain while searching his home, and kidnapping him before taking him to an unknown destination.

The arrests in Nablus are part of an escalating Israeli military campaign targeting students in the district, and at various roadblocks.

On Sunday evening, soldiers kidnapped a Palestinian at the al-Hamra roadblock, near the central West Bank city of Tubas.

He was heading back home when the soldiers stopped him.

Local sources said that the army repeatedly invaded the village, on Sunday evening and Monday, at dawn, and used loud speakers and sirens as the villagers slept.