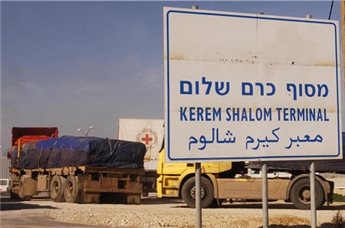 Deliveries of fuel to the Gaza Strip resumed, on Sunday, as Israeli authorities allowed the Kerem Shalom (Kerem Abu Salem) crossing to re-open, according to Palestinian crossing officials.Ma’an News Agency reports that the decision comes only a day after the besieged coastal enclave’s sole power plant was forced to shut down after Israel closed the border crossing, cutting off its supplies of fuel and further restricting the Gaza Strip’s already limited power supply.

General director of the border crossing, Nathmi Muhanna, told Ma’an that Israeli authorities had informed him, on Saturday evening, that they had decided to resume shipments of fuel to the power plant Sunday.

Israeli officials at the southern Gaza Strip crossing refused to allow any other commodities to enter, he added.

Head of the Coordination Committee for entry of goods in the Gaza Strip, Raed Fattouh, said that limited amounts of industrial diesel, petrol, diesel and cooking gas will enter Gaza via the crossing, according to Al Ray.

The Gaza power plant, which was already severely low on fuel, announced on Saturday that it would cut the electricity supply to the Strip’s 1.7 million residents from twelve hours a day to six until fuel run out.

Deputy director of the energy authority, Fathi Sheikh Khalil, said that the entry of fuel to the power plant, today, will directly return the 8-hour program of electricity distribution.

Israeli authorities closed the Kerem Shalom crossing, on Thursday, due to the outbreak of fighting between militant groups and Israeli forces, which involved rocket fire into Israel as well as air strikes on Gaza before a ceasefire was re-activated.

Lack of diesel fuel is a result of the tightening of a 7-year-long blockade imposed on the territory by Israel with Egyptian support.

Furthermore, Ma’an reports that, until July of this year, tunnels connecting Gaza to Egypt provided a vital lifeline for the territory amidst the otherwise crippling Israeli blockade. The blockade has been in place since 2006, and it has limited imports and exports and led to a major economic decline and wide-reaching humanitarian crisis.

In the last year, however, the situation had greatly improved, as the tunnels to Egypt witnessed a brisk trade following the Egyptian Revolution. Since the July coup against Egyptian president Morsi, however, Egypt has strictly enforced the blockade and targeted the tunnels.

Gaza Strip energy officials blame Egypt for destroying these tunnels, while maintaining the larger economic blockade along with Israel.