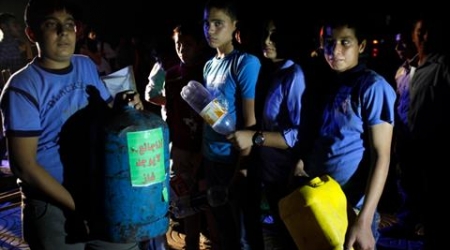 Scores of patients and disabled Palestinians, on Saturday, staged a protest outside of the Egyptian embassy, in the Gaza Strip, to call for the reopening of the Rafah border crossing between the Palestinian territory and Egypt.’The closure deprives me of my medicines,’ reads a placard held by some demonstrators during a rally organized by the National Committee to Break the Siege.

Al Ray Palestinian Media Agency reports that Mohamed al-Kahlout, a spokesman for the demonstrators, described the blockade on the Gaza Strip and the closure of the Rafah crossing as a ‘choking’ of the Palestinian people.

‘The closure of the crossing is creating a human tragedy in Gaza,’ al-Kahlout told Anadolu Agency.

‘We just want to lead a dignified life like all other human beings,’ he added.

Several residents have died at Rafah crossing after being stranded there for several weeks, due to the closure.

Just this past week, 3-year-old Ahmad Ammar Abu Nahl was suffering from an enlarged heart and liver and had been planning to go to Turkey via Egypt for treatment. The young child died Thursday, while waiting for the crossing to open.

The Gaza Strip has been suffering an Israeli-imposed blockade since 2006.

Palestinians say the blockade has deprived the Palestinian enclave’s 1.8 million residents of their most essential needs. An all-out Egyptian crackdown on smuggling tunnels between Egypt and Gaza has also come to add insult to the injury of the Palestinians.

The new Egyptian measures, which followed the ouster by the military of elected president Mohamed Morsi, last July, also includes extended closures of the Rafah crossing.