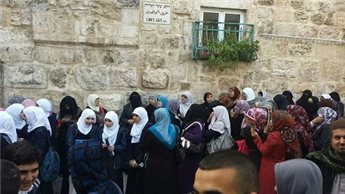 [Sunday, March 16, 2014] Israeli special forces stormed the Al-Aqsa mosque compound, injuring a number of worshipers on Sunday morning, according to witnesses.
Eyewitnesses said that soldiers entered the compound through the Chain Gate, throwing stun grenades and shooting rubber bullets at worshipers, blockading them inside the Al-Aqsa mosque; several were wounded by rubber bullets and fragments of stun grenades during the raid.

In addition, 500 students who study at religious schools inside in the compound were also denied access.

The clashes coincide with the Jewish holiday of Purim, Ma’an News Agency reports. Activists affiliated with Jewish organizations which call for the destruction of the mosque and the construction of a Jewish temple on the site had, earlier, issued calls on social media for Jewish worshipers to celebrate the holiday inside the Al-Aqsa compound.

According to witnesses of the event, Israeli forces had been stationed at the gates of the Al-Aqsa compound since early Sunday, imposing restrictions on the entrance of Palestinians into the compound.

Israeli police spokesman Micky Rosenfeld said that stones were thrown at police officers at the Moroccan Gate as the site was opened to visitors, adding that police units on site were dealing with ‘disturbances.’

The ‘Arab rioters’ subsequently fled the area and ‘police did not enter the compound,’ while ‘visits continued as normal,’ he added.

Because of the sensitive nature of the Al-Aqsa compound, Israel maintains a compromise with the Islamic which that controls it to not allow non-Muslim prayers in the area. Israeli forces regularly escort Jewish visitors to the site, leading to tension with Palestinian worshipers.

Al-Aqsa is located in East Jerusalem, a part of the internationally recognized Palestinian territories that have been occupied illegaly, by the Israeli military, since 1967.

It is venerated as Judaism’s most holy place as it sits where Jews believe the First and Second Temples once stood. The Second Temple was destroyed by the Romans in 70 AD.

The compound, which sits just above the Western Wall plaza, houses both the Dome of the Rock and Al-Aqsa mosque and is the third holiest site in Islam.

Today’s confrontation is but one of several such incidents occurring in 2014 alone, in the escalations which have led to the imposition of the current restrictions.