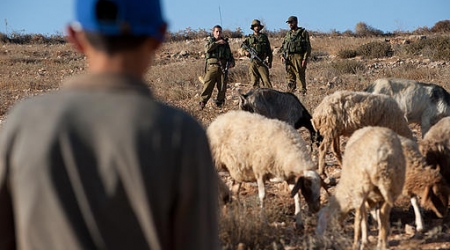 On Sunday, March 16, during the Jewish holiday of Purim, Israeli settlers attacked Palestinians and Internationals on Palestinian fields near Mitzpe Yair illegal outpost.(ISM/Al Ray) In the morning, four Palestinian shepherds from the village of Qawawis were grazing their flocks south of the Israeli outpost of Mitzpe Yair, when a settler arrived armed with an iron pipe to threaten them shouting.

At 9:18 am two Internationals arrived together with two further Palestinian shepherds. The armed Israeli settler then left when he saw that they were filming the scene.

At 9:28 am eight settlers arrived from the illegal outpost – one was still armed with the iron pipe – and four of them violently chased away the flocks, pushing them toward the valley underlying the outpost. Palestinian shepherds followed the settlers in order not to lose their flocks accompanied by Internationals. The Palestinians immediately called the Israeli police.

At 9:48 am the settlers came back to the outpost. In the meantime, an additional Internationals and two Palestinian members of the South Hebron Hills Popular Committee arrived at the scene.

At 10:00 am one of the settlers tried to chase away one of the newly-arrived Palestinians, a member of the Israeli human rights organization B’Tselem. As this happened, an Israeli policeman and three Israeli soldiers arrived by foot.

At 10:20 am, as the policeman began interrogating the attendants, a further three settlers arrived. Those interrogated were the Palestinian shepherd Nail Abuaram (who filmed everything with a B’Tselem camera) and one international.

At 10:45 am, the policeman lead Abuaram and one of the Internationals to Kiryat Arba police station to give testimony of the harassments. They arrived at the station at noon.

The International was asked for the camera footage of the incident, interrogated and finally released at around 2:50 pm. Abuaram was interrogated alone for a couple of hours and was threaten of arrest until he accepted to sign a paper stating that he will not get closer than 450 meters to the area where the harassment took place for a period of 15 days.

He was later released around 6:00 pm after signing the paper. The Israeli police forced the settler who attacked the Palestinians with an iron pipe to stay 200 meters far from the spot where the harassment took place for a period of 15 days.

Palestinian communities of the South Hebron Hills area are strongly involved in using nonviolence as a way to resist the Israeli occupation.

Operation Dove has maintained an international presence in At-Tuwani and the South Hebron Hills since 2004.