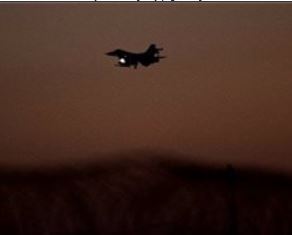 Israeli sources have reported that the Israeli Air Force fired, on Wednesday, at dawn, several missiles into a number of Syrian army sites, in what Israel claimed to be a retaliation to a Golan Heights bombing that left four Israeli soldiers wounded.The army said that the attack against its soldiers, which took place on Tuesday, is part of what it called an escalation to the conflict between Israeli and the Lebanon-based Hezbollah party which sides with Syrian President, Bashar Assad.

He claimed that Syria aided Hezbollah fighters in carrying out their attack against the soldiers in the Golan Heights.

“The Israeli army reserves the right to retaliate at the time and place it sees fit”, Adraee said.

Israeli Ynet News said the attack against the Israeli army near the Syrian border is a serious escalation in the already tense relations between Israel and Hezbollah.

It added that Israel recently established a new combat battalion in the Golan Heights, and that the unit is equipped with advanced observation systems and radars which have “managed to prove their effectiveness in recent weeks”.