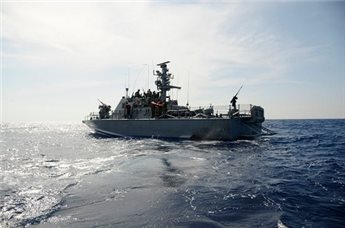 An Israeli military spokeswoman said that the boat had ‘deviated from its designated fishing zone.’

‘Israeli navy soldiers called on the boat to stop, but once it failed to comply, they opened fire in its vicinity’ upon which it returned to its designated area.

The incident comes a day after the Israeli military exchanged fire with Palestinian militants on the shore in southern Gaza, in a late-night face-off.

In the Oslo Accords, Israel agreed to a 20-nautical-mile fishing zone off Gaza’s coast but it imposed a 3-mile limit for several years, opening fire at fishermen who strayed further.

Israel has controlled Gaza waters since its occupation of the area in 1967, and has kept several warships stationed off the coast since 2008.

There are some 4,000 fishermen in Gaza. According to a 2011 report by the International Committee of the Red Cross, 90 percent are poor, a 40 percent increase from 2008 resulting from Israeli limits on the fishing industry.