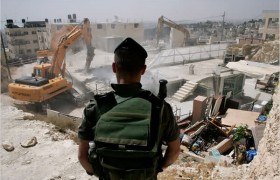 [Wednesday, March 19, 2014] Israeli soldiers invaded the al-Aqaba area in Beit Hanina, in occupied East Jerusalem, before bulldozers of the Jerusalem City Council demolished one Palestinian home.The city council alleges that the home was built without a construction permit; the family wasn’t even given enough time to remove their furniture and belongings.

The demolished property belongs to the Salayma family in Wady ad-Dam area.

The family lost its home several months ago after Israeli soldiers demolished it and built a small structure in its place.

Family members were rendered homeless again, Wednesday, when the soldiers demolished their property.
Eyewitnesses said dozens of soldiers invaded the area after surrounding it, and demolished the property.

The Israeli Committee Against House Demolitions (ICAHD) previously reported that Israel has demolished about 27.000 Palestinian homes, and other structures, since 1967.

It also said that the exact number cannot be precisely determined, especially when taking into consideration that the Israeli Authorities only report the “demolition of structures”.

ICAHD explained that when, for instance, Israel demolishes a seven-story apartment building containing more than 20 housing units, the attack is only considered one demolition.