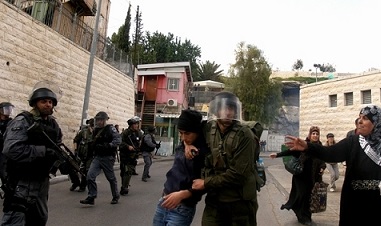 [Wednesday Evening, March 19, 2014] Israeli soldiers invaded the village of Zabbouba, west of the northern West Bank city of Jenin, and clashed with dozens of residents before kidnapping twelve, and wounding dozens.Medical sources have reported that most wounded residents suffered the effects of tear gas inhalation, and received treatment by local medics.

Several Palestinians were also injured after being attacked and beaten by the invading soldiers.

Eyewitnesses said that several armored Israeli military jeeps invaded the village during evening hours, harassing dozens of residents, which led to clashes with local youth who threw stones and empty bottles at them.

In related news, soldiers installed a roadblock at the junction leading to the villages of Rommana and Zabbouba, stopped and searched dozens of Palestinians and interrogated several residents while inspecting their ID cards.