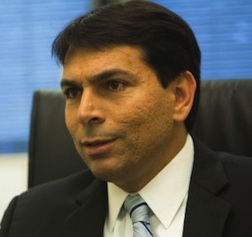 A day after the Israeli government announced a delay in the promised release of 30 long-term Palestinian prisoners, Israeli Deputy Defense Minister Danny Danon threatened, on Wednesday, to resign from his position if the release is carried out – a move which his critics claim is a political maneuver and not an actual threat.The group of thirty, all of whom have been imprisoned for over twenty years, are the third group of 104 prisoners promised their freedom under a deal negotiated between the Israeli government and the Palestinian Authority, based in the West Bank.

The other two groups have already been released. However, although the third group is scheduled to be released on March 28th, an Israeli government official claimed on Tuesday that the release of prisoners may be delayed, due to a lack of progress in the so-called ‘peace negotiations’ led by U.S. Secretary of State John Kerry.

Tuesday’s statement by Israeli Economy Minister Naftali Bennett was announced on Israeli Army radio. Palestinian negotiator Issa Qaraqe said that any such delay would be considered ‘political blackmail’ by the Israeli government against the Palestinians.

On Wednesday, a day after Bennett’s claim of a potential delay, Deputy Defense Minister Danny Danon made his threat, claiming that he would resign if the final group of prisoners was released. Danon stated, “I will not be part of this executive branch if it will condone and take further steps toward releasing prisoners … the day that the next Palestinian murderer takes his first steps out of jail, I will send a resignation letter, effectively stepping down from my position as deputy defense minister of Israel.”

The statements by both ministers come in the midst of a political fissure in the coalition of parties which make up Israeli Prime Minister Binyamin Netanyahu’s government. Naftali Bennett is the leader of the religious right party ‘Jewish Home’, which boycotted a session of the Israeli legislature on Wednesday, in protest of a bill pushed by Netanyahu regarding conversions to Judaism.

Danon is a member of the right-wing faction of the Likud party, which will be holding its annual party summit three days after the planned prisoner release. At the summit, Danon will be debating Netanyahu and likely proposing a plan to split the Likud party.