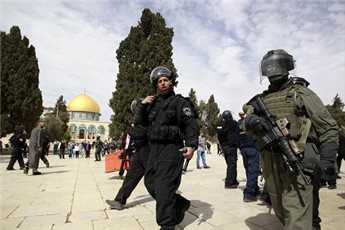 Clashes broke out, on Thursday, between Palestinian worshipers and Israeli forces in the al-Aqsa compound, following a visit by a right-wing Israeli MK, according to locals.Witnesses told Ma’an News Agency that Likud party MK Moshe Feiglin, with a number of other right-wing politicians, entered the mosque compound via the Moroccan Gate and toured the courtyards.

Worshipers shouted ‘Allahu Akbar’ (God is Greatest) at the group before Israeli forces raided the compound and began assaulting them with clubs. In response, young Palestinians began throwing stones at the Knesset members, forcing them to leave the compound.

Several worshipers and Shariah Law students sustained bruises and one of them was treated at a clinic in the Aqsa compound.

An Israeli police spokeswoman said two Palestinians were detained after throwing stones at Moshe Feiglin. The controversial Likud MK has stated in the past that Palestinians in Israel should be relocated and that there is no such thing as a Palestinian people.

Due to the sensitive nature of the issue surrounding Al Aqsa mosque, Israel maintains a compromise with the Islamic trust which controls the compound — overseen by Jordan — to restrict the area for Muslim prayers. Israeli forces, however, regularly escort Jewish visitors to the site, often leading to tension with Palestinians.

The compound, which sits just above the Western Wall plaza, houses both the Dome of the Rock and the Al-Aqsa mosque and is the third holiest site in Islam. It is also venerated as Judaism’s most holy place as it sits where Jews believe the First and Second Temples once stood. The Second Temple was destroyed by the Romans in 70 AD.

Western Christians remain divided on the idea of a future third temple, as many believe it simply to be a spiritual allegory for the body of Christ, as prophesied in the book of Revelation.