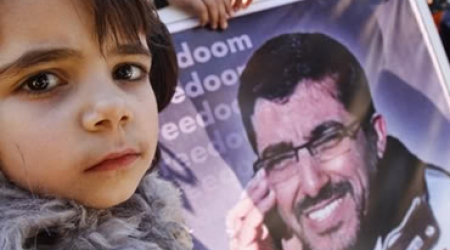 Spokesperson of Waed Association for Prisoners and Ex-prisoners, Abdullah Qandil, said that prisoner Dirar Abu Sisi was transferred today [Monday, March 24, 2014] from “Eshel” prison to “Soroka” hospital, in Beersheba, due to the deterioration in his health.Al Ray reports that Qandil confirmed the Israeli Prison Service (IPS) transferred Abu Sisi to “Soroka” hospital. ‘His health is in danger and it’s worsening steadily,’ he added.

Abu Sisi is inside an unhealthy and inhumanitarian isolated cell in “Eshel Prison” since his arrest. He is exposed to various acts of torture and humiliation by the IPS and suffers from heart and stomach troubles and high blood pressure.

Abu Sisi, 44, is married to Ukrainian Veronica Abu Sisi and is a father of six children. He worked as a director of Palestine Company for Power Generation in the Gaza Strip.

He was kidnapped by personnel of Mossad on February 18, 2011, in the Ukraine, while he was about to complete the procedures of obataining Ukrainian nationality.