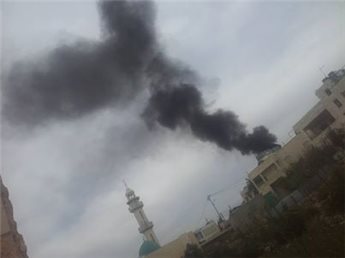 The two Israeli soldiers were lightly wounded when Palestinian youth threw bricks from the roof of a building. The soldiers were wearing helmets and riot gear, so were not badly injured by the bricks.

Two Israeli soldiers and a Palestinian youth were injured as clashes with Israeli forces in Aida refugee camp, north of Bethlehem, continued for a second day, Sunday.

Locals told Ma’an News Agency that Israeli forces raided several houses in the camp, taking them over and using them as military posts, while firing tear gas grenades throughout the camp. Local youth responded by hurling rocks at Israeli forces.

According to Ynet, two soldiers were ‘critically’ wounded in the clashes.

Witnesses in the camp said that two Israeli soldiers were laying injured in the camp after Palestinians threw bricks at them from a rooftop near the camp school.

Israeli forces opened fire at the camp after the incident, and called for reinforcements in order to evacuate the injured soldiers.

A young Palestinian was also shot in the head with a rubber-coated steel bullet when soldiers opened fire on protesters.

The Israelis also opened fire on the car of Associated Press photographer Iyad Hamad, as he covered the clashes.

Dozens suffered from excessive tear gas inhalation during the clashes.

Soldiers also inspected vehicles in the camp and prevented the movement of locals, despite the heavy presence of tear gas in residential areas.

The clashes come a day after heavy clashes in the camp, as locals protested against the killing of three Palestinians, during a raid in the northern West Bank city of Jenin, on Saturday.

Aida camp is a frequent site of clashes because it is located beside Rachel’s Tomb, which is surrounded on three sides by the Israeli separation wall despite being in the middle of the Palestinian city of Bethlehem.

Continue reading at Ma’an, via link below.