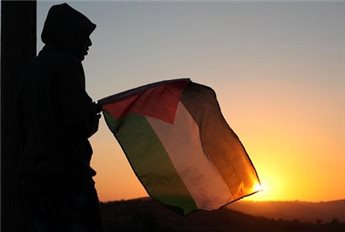 Palestinian President Mahmoud Abbas has agreed to extend peace talks with Israel, if certain conditions are met, a Palestinian official said on Monday.Photo: A Palestinian youth holds his national flag as the sun sets during
clashes with Israeli security forces in the West Bank village of
Silwad, north of Ramallah, on January 24, 2014 following a
protest over the expansion of Israeli settlements.

The official, speaking on the condition of anonymity, told Ma’an News Agency that Abbas agreed, during a recent meeting with US President Barack Obama, to extend peace negotiations if Israel pledged to freeze settlement construction and release more prisoners.

So far, 78 of 104 Palestinian veteran prisoners have been freed in three groups, with the final 26 to be released on March 29. However, recent statements by Israeli officials have cast doubt on whether the prisoners would be released on time, if at all.

The official said that if Israel delayed the release of the last group of pre-Oslo prisoners, the Palestinian Authority would immediately take the case to international organizations.

Peace talks between Israelis and Palestinians were relaunched in July under the auspices of the US after nearly three years of impasse.

Israel’s government has announced the construction of thousands of settler housing units and its army has killed 60 Palestinians in the West Bank and Gaza, since the negotiations began.