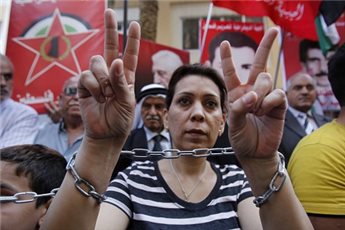 Israel has told the PLO that it will not free the final group of prisoners they had been expecting alongside US-brokered peace talks, a senior Palestinian official said on Friday.(Ma’an/AFP) Under the deal which relaunched the talks in July, Israel said that it would release 104 Palestinians held since before the 1993 Oslo peace accords, in exchange for Palestinians not pressing their statehood claims at the United Nations.

Israel has so far freed 78 prisoners in three batches, but cabinet members had warned they would block the final release, anticipated for the end of March, if the Palestinians refused to extend the talks beyond their April 29 deadline.

‘The Israeli government has informed us through the American mediator that it will not abide with its commitment to release the fourth batch of Palestinian prisoners scheduled for tomorrow, Saturday 29,’ Jibril Rajub told AFP.

‘Israel has refused to commit to the names that were agreed upon of prisoners held by Israel since before the 1993 Oslo agreements,’ Rajub said.

Israeli officials had no immediate comment, at the time of this report.

But, Israeli ministers have said previously that the prisoner releases were always conditional on progress in the talks, which have failed to materialize.

Many also baulked at the inclusion of Palestinian citizens of Israel among the prisoners slated for release.

Rajub called the Israeli move a ‘slap in the face of the US administration and its efforts,’ and said the Palestinians would resume their international diplomatic offensive.

‘Not releasing the prisoners will mark the beginning of the efforts in the international community to challenge the legality of the occupation,’ he said.

The talks have been teetering on the brink of collapse, with Washington attempting to get the two sides to agree to a framework, for continued negotiations until the end of the year.

US Secretary of State John Kerry met Palestinian president Mahmoud Abbas in Amman, on Wednesday, in a bid to salvage the talks, with US special envoy Martin Indyk meeting the Palestinian leader in Ramallah, on Thursday.

A major obstacle to success in the current round of talks has been the inclusion in Kerry’s plan of recognition, by Palestinians, of Israel as a ‘Jewish’ state. Kerry approved, in February, the drafted framework peace agreement, which was to be signed between the Palestinian Authority and Israel.

Reports from Israel immediately surfaced that Kerry was pressing Jordan and Saudi Arabia to accept the recognition, in an effort to get Palestinians to follow suit. However, US State Department officials flatly denied this or that any efforts were under way to get the league to veer from its 2002 peace initiative.

Kerry went on to tell members of Congress that international law had already declared Israel a Jewish state and openly criticized Prime Minister Benyamin Netanyahu’s insistence on a public recognition of Israel’s inherent Jewish nature, calling it ‘a mistake’ in the diplomatic process. His comments drew much criticism by Israeli ministers, via the press, with the obligatory apologies and handshakes to come shortly after.

In a recent Arab League Summit, officials publicly refused to recognize Israel’s Jewishness, in a joint statement, stressing the illegality of the Israeli colonial settlements in the occupied Palestinian territories of West Bank, and condemning the occupation measures in Jerusalem.

Israel’s government has announced the construction of thousands of settler housing units and its army has killed 60 Palestinians in the West Bank and Gaza since the talks began.

The Israeli government has also insisted that it maintain a military and civilian presence in the occupied Jordan Valley, which forms around a third of the West Bank, and has insisted that the PLO recognize it as a ‘Jewish state,’ despite having already officially recognized Israel decades earlier.

IMEMC contributed to this report.