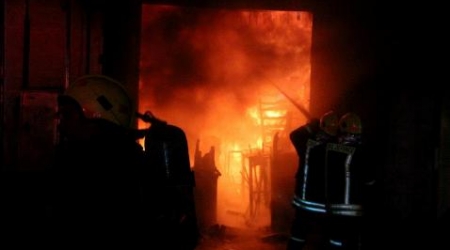 Two children have died, and four others were wounded, in a candle fire which broke out in their home in Rafah, in the southern Gaza Strip. The families of Gaza seek other means of lighting because of the ongoing electricity outages, which are now up to 12 hours a day.
An Al Ray correspondent reported that Malak Sheikh al-Eid, age 2, and Ghena Sheikh al-Eid, a year and a half, died immediately and arrived at the hospital with charred bodies, while the other four members of the family sustained moderate to severe injuries.

He added that the mother sustained light injuries, the father and his daughter with moderate injuries, while the other daughter was seriously wounded. They were transferred to Nasr Medical Complex in Khanyounis.

Civil Defense rescue crews were able to extinguish the fire. Intervention forces arrived on the scene of the accident, imposed security and facilitated the rescue crew’s mission.

The Ministry of Health blamed the international community and the Arab Summit, stressing that the death of the two children is added to the invoice that the besieged Palestinian people pay every day.

Similar incidents happen in Gaza on a daily basis. The people of Gaza are obliged to use candles for illumination, due to the continuous power cut caused by the siege imposed by the Israeli occupation since 2006.