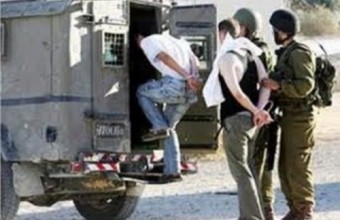 Israeli occupation forces on Wednesday abducted eight Palestinians from the West Bank cities of Nablus, Hebron, Jenin and Bethlehem, according to reports by media and security sources.Occupation forces raided the village of Burqa, north of Nablus, searching several houses and interrogating a number of Palestinians in the village, before taking into custody Islam Kayry Saif and Ahmad Ayman Hageh.

In Hebron, soldiers took both Mahran Mahmoud Amreesh, 18, and Waleed Najeeb Alzghyer, 21, after searching their houses and rummaging with the contents.

The sources added that the occupation broke into and searched the house of the liberated prisoner Hamdoun Abu-Snanyeh, according to the Palestinian News Network (PNN).

In Jenin, soldiers kidnapped three Palestinians from the village of Yabud and raided several houses.

The army also abcucted a Palestinian from Aida refugee camp, north of Bethlehem.

According to local sources, troops stormed the camp, raided and searched the house of the al-Azraq family, and then abducted the 28-year-old Mohammad Qassem al-Azraq, Fatah’s secretary-general in the camp.