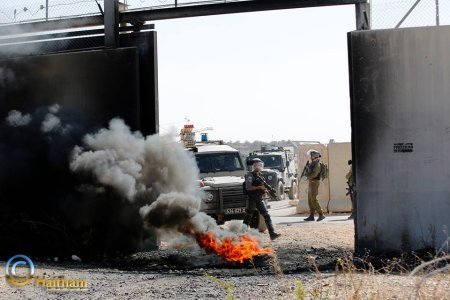 The Bil’in Freedom demonstration took place on Friday afternoon, as it has every Friday afternoon for the past 13 years. Around 60 local villagers were joined by 40 Israeli and international activists and marched to the site of the Israeli Annexation Wall.

According to local sources, the march began on ‘Freedom Street’ in Bil’in, and the protesters managed to march through their olive and farm fields to the site of the Israeli Wall.

When they arrived at the Wall, some demonstrators climbed up and hoisted the Palestinian flag on top of the Wall.

The gates of the Wall opened, and Israeli troops came through – they threatened the international activists with arrest and deportation if they did not leave the area at once.

The Israeli soldiers told the crowd that they had ‘official orders’ to vacate the area. When the residents asked for a copy of the order, the soldiers just waved a paper i n the air, but would not let anyone see it.

The international activists were forced to hand their passports to the Israeli soldiers, who made copies of the passports. Some of the solidarity activists were from Israel, Holland and Canada.

Local peace activist Ashraf Abu Rahma told the IMEMC, “This action is meant to intimidate the activists, and to prevent them from entering the country if they decide to return”.

Abu Rahma also told the IMEMC that on rare occasions, Israeli military officials issue a permit to certain farmers to be able to get to their land – but this permit never corresponds with the times that the farmers need to be able to plant, cultivate or harvest their crops. As a result, crops get planted too late, or are left rotting in the fields because the farmers could not get a permit for the days of the harvest.

Local sources reported that, for the first time in years, there were no arrests or abductions of locals by Israeli soldiers this week.

Palestinian photographer and Bil’in resident, Haitham al-Khatib, wrote, “I am hosting some activists in my home now and I am proud of their courage and I thank them for blessing our village with their visit! Palestinians are loving welcoming people and we always welcome you ALL to visit and WE NEED YOUR SUPPORT! You will always find love from us, its all we have but we give it freely and generously! Thank you International activists!”

The Palestinian farmers from Bil’in are frequently prevented from taking care of their land or harvesting their crops – particularly their olives, according to local sources. Local resident Ashraf Abu Rahma also told the IMEMC that sometimes the farmers go to their fields accompanied by international solidarity activists, but they are assaulted by Israeli settlers who live illegally in the area.

It should be noted that the village of Bil’in has been celebrating its Olive Festival this week, and a number of international supporters participated in the festivities and the attempts to harvest the village’s olives.