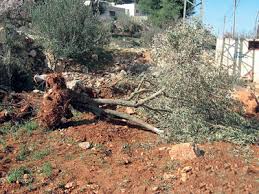 [Thursday, May 1, 2014] A number of Israeli settlers invaded a Palestinian olive orchard, south of the West Bank city of Bethlehem, and uprooted around 50 saplings.Coordinator of the Popular Committee against the Wall and Settlements in the Bethlehem District, Hasan Breijiyya, told the WAFA Palestinian news agency that the attacked orchard is located in Khallet an-Nahla area of Wady Rahhal village.

The invaded orchard belongs to resident Issa Ali Zeyada; he told WAFA that the area was recently subject to escalating attacks, and that the attacks included uprooting trees, bulldozing lands and assaults on local villagers.

On Wednesday, the villagers managed to obtain a ruling from an Israeli court ordering the settlers to leave the orchard and remove a room they installed.

In Hebron, in the southern part of the West Bank, a number of Israeli settlers hurled stones at Palestinian cars driving near Keryat Arba’ settlement, east of the city; damage was reported, but no injuries.

In related news, three Palestinians from the al-Khader town, south of Bethlehem, received military orders informing them that the army intends to demolish a shed and a barn.

Personnel of the Israeli Civil Administration Department, accompanied by Israeli soldiers, handed the orders to the residents.

Coordinator of the Popular Committee against the Wall and Settlements in al-Khader, Ahmad Salah, said the soldiers want to demolish a shed used for repairing and painting cars, and a horse barn.

The property belongs to residents Osama Salah, Imad Sarafandy, and Mohammad Da’dou’; they were given 45 days to demolish their structures, and if they don’t, the army would demolish them and send them the bill.

Several homes and structures were previously demolished by the army in the area, while several structures have pending demolition orders against them.