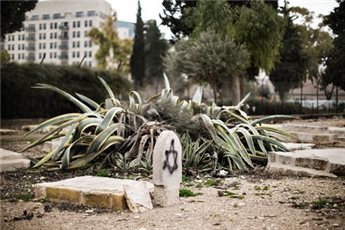 Suspected Jewish Israeli vandals desecrated a Muslim grave near Haifa, in the northern Israeli coastal region, according to media and police reports.’Graffiti was found sprawled on and around a grave in the Al-Qassam cemetery in Nesher,’ said Israeli police spokeswoman Luba Samri, in a statement.

The graffiti, painted in red, featured the six-pointed Magen David star, the words ‘price tag’ and the names of US Secretary of State John Kerry and Israel’s chief peace negotiator with the PLO, Tzipi Livni.

For the first time ever, the US State Department’s 2013 Country Reports on Terrorism, published on Wednesday, includes a reference to a ‘growing wave of racist anti-Palestinian vandalism’, euphemistically known as ‘price tag’ attacks, to quote AFP/Ma’an.

The report cited UN figures of some ‘399 attacks by extremist Israeli settlers that resulted in Palestinian injuries or property damage’.

Just Tuesday, vandals attacked a mosque in the small Palestinian town of Fureidis, near Haifa.

Also targeted was Tabgha church, on the shores of the Sea of Galilee, where the communal effort immortalized by New Testament scribes, in the story of the loaves and fishes, is believed to have taken place.

According to church officials, a group of Jewish youngsters damaged crosses there and attacked members of the clergy.

Attacks such as these target Palestinians, and their property, and anyone else opposed to Israeli settlements.

‘Settlements’, in occupied Palestine, commonly refer to the Jewish-designated civilian communities built on lands occupied by Israel during the 1967 Six-Day War. Such settlements currently exist in the West Bank, East Jerusalem, and in the historically disputed Golan Heights area bordering Syria. The settlements are, under International Law, illegal.

In 2014 alone, Israeli occupation has constructed 748 settlement units in the occupied West Bank and Jerusalem. .

Furthermore, plans for nearly 14,000 new settler homes were approved, by the Israeli government, during the nine months of US-brokered peace talks with Palestinians — this in addition to over 500 Palestinian structures which were demolished throughout the negotiation period that formally ended on April 29th.

The Israeli Committee Against House Demolitions reports that Israel has demolished about 27,000 Palestinian homes and other structures since 1967.

The grave attacked on Friday is named after Ezzedine al-Qassam, who led fighting against the British and French, in Mandate Palestine, and was killed during a firefight, in 1935.